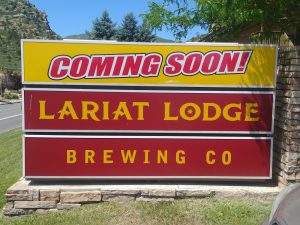 Lariat Lodge II, the second Lariat Lodge Brewery, located off of C-470 and Ken Caryl Ave.,  is hoping to open on August 12th. Fingers crossed,  the final paperwork and approvals that they’re waiting on will come through on time. So, we’ll all get to enjoy some freshly brewed beer and delicious BBQ  on the 12th.

We stopped in to take a look at the renovations and talked with the owner, Debbie, about what people can expect once they open.  The renovations are almost finished, and the interior feels more open yet cozy at the same time than the former Rox.  They’ve enclosed the upstairs with a wooden half wall that should help with the acoustics of the space. The stainless steel brewing tanks are in and are four times larger than the tanks at their Evergreen location.

The menu will be the same as at the Evergreen brewery. Favorites like burgers, BBQ and fish and chips are on the menu, although they won’t be offering their brunch initially. There will be a full bar in addition to their beer offerings. Their flagship brews are their Lariat Lodge IPA, Bear Creek Blonde Ale, Angry Elk Amber Ale, and the Golden Goliath. 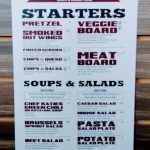 The greatest thing that Debbie had to say was how supportive the community has been of them during this whole process.

Visit their website to find out more about Lariat Lodge Brewing Co.

There are no upcoming events at this time.

Saturday, August 22nd, Ent Credit Union is hosting the grand opening of
The management at the Aspen Grove shopping center is trying to
It’s undeniable that food allergies and food sensitivities are a growing problem
Say Hello! Coal Mine Kitchen- 9719 W. Coal Mine Ave. Littleton, 80123
For over 40 years Angelo’s Taverna has been a bustling hub —
Go to Top
We use cookies to ensure that we give you the best experience on our website. If you continue to use this site we will assume that you are happy with it.Ok